Phoenix, Arizona - Governor Doug Ducey Wednesday attended the Ten Across Water Summit, speaking about Arizona’s progress in working together to secure the state’s water future with the passage of the Drought Contingency Plan. 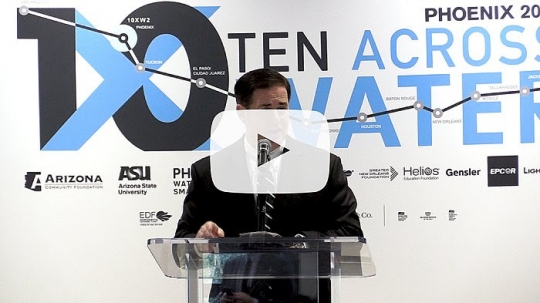 Originating at Arizona State University, Ten Across is a collaborative project that brings together states, cities, businesses and other stakeholders along the Interstate 10 corridor to focus on issues of water, land use, energy and more.

Below are a few highlights from the governor’s remarks:

“Following many years of discussion between stakeholders — rural,     urban, agriculture, industry, tribal communities, non-profits, cities and     more — Arizona came together just 55 days ago to pass the Drought     Contingency Plan… The states have done our job and now it’s time     for Congress to move forward so we can implement this plan     and secure our water future.”

“Along the I-10 corridor, we all have unique challenges with water… In     Arizona, our challenges center on dryness and conservation. But even at     a time such as this, when there is so much in the political arena that     threatens to divide people, Arizona has proven that our greatest     challenges, especially around water, should and can unite us.”

On January 31, 2019, Governor Ducey signed Arizona’s Drought Contingency Plan, one of the most historic pieces of water legislation in the state in over 40 years. The plan allows Arizona to join six other western states and Mexico in signing onto an inter-state water agreement to conserve water in the Colorado River.

In addition to signing the Drought Contingency Plan, Governor Ducey also issued an Executive Order establishing the Governor’s Water Augmentation, Innovation and Conservation Council (Council). The Council, which focuses on long-term water conservation and innovation, held its first meeting on March 8, 2019, at the Arizona Department of Water Resources (ADWR).

On March 19, 2019, leaders from all seven basin states came together in Arizona to sign a joint letter to Congress memorializing the inter-state Drought Contingency Plan and urging the federal government to move forward with the plan.

To continue these efforts, ADWR Director Tom Buschatzke joins advocates of the Drought Contingency Plan in Washington, D.C. today to testify in front of the U.S. House of Representatives and the U.S. Senate on the need for federal legislation approving the drought plan.